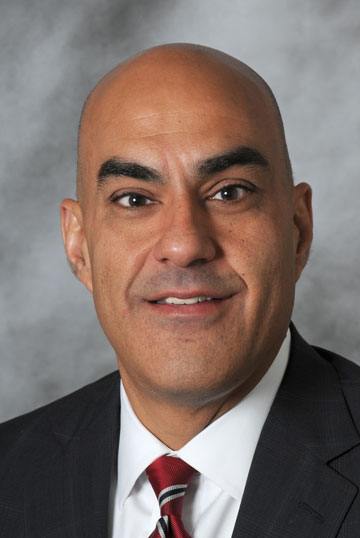 Frank Nogel, who has more than 30 years experience in business development, constituent engagement and revenue generation, is in his 21st year at Iowa State University, where he serves as Senior Associate Athletics Director (AD) for External Relations.

During his tenure at Iowa State, he has also overseen marketing and promotions, radio and television contracts, food and beverage and the ISU Letterwinners Club. Under Nogel’s leadership, all-time records have been set in fundraising and season ticket sales multiple times. Those two areas generate more than $45 million annually. Nogel and his team have also created and launched several popular outreach events, including Cy’s House of Trivia, the Cyclone Tailgate Tour and Cyclones Unplugged.

He spent five years with the Iowa Barnstormers of the Arena Football League serving as Vice President of Marketing and Operations. Nogel also worked for the Greater Des Moines Grand Prix and started his career in athletics administration at Drake.

Nogel was selected to attend the Division 1A Athletics Director’s Institute in 2006 and 2007 and the National Association of College Directors of Athletics (NACDA) Senior Administrators Mentoring Institute in 2016. He has been a member of the National Association of Athletics Development Directors (NAADD) since 2000. He is a graduate of Leadership Ames and has served on the Board of Directors for the Iowa Sports Foundation, Ames Chamber of Commerce, Ames High School Booster Club and Mary Greeley Medical Center Foundation.

The Des Moines native earned his bachelor’s degree from Iowa State. He and his wife, Cheryl, have two children: Ashley (Iowa State ’18) and Joseph (a student at DMACC).